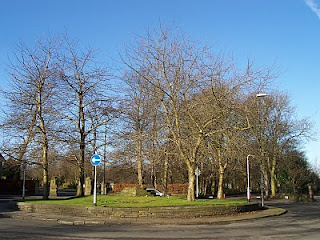 We took a walk up to the local park this morning, it was cold but sunny for a change so we made the most of it. It was a great morning for the birds. They were in full singing form today, nearly every tree we passed we stopped to see who was singing!
There are some large gardens around the park and they were full with birds as we walked past, especially lots of Blue Tits and Great Tits. At the park gates there were two Robins singing loudly and a couple of Chaffinch flying about our head.
Blackbirds were everywhere, turning over leaves and running in and out of bushes. We saw one checking out this nest. 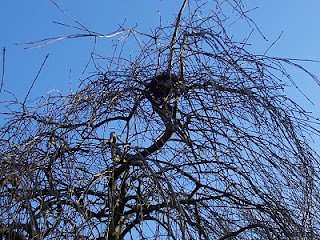 We spotted a Greenfinch and lots of Magpies in the trees. Someone has been hanging fat balls on the trees in the middle of the park. It would be nice to have a feeding station here I think. The park really takes on a different look with all the bare trees! 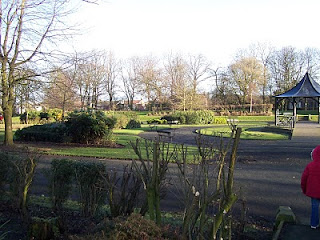 We had to stop for the swings of course and all around this area were Mistle Thrush. I counted 7 sat at the top of one tree along with 3 Magpies. Every now and then they would fly together to the next tree top. A couple of Magpies appeared to have paired up and one of them was flying about with a twig in its mouth - maybe a little nest building?

One sat on a tree next to the play area, I managed to get a couple of photos before it was scared off. 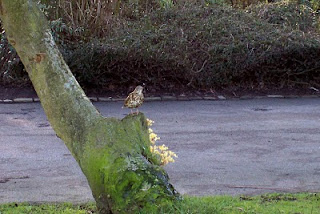 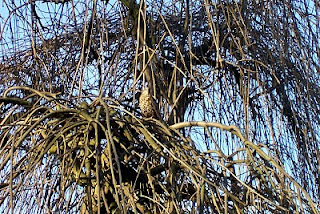 My little one insisted on a photo of the spiky flowers! 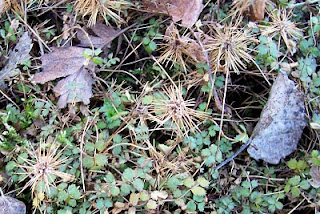 Then she found this with about half a dozen flowers on it. 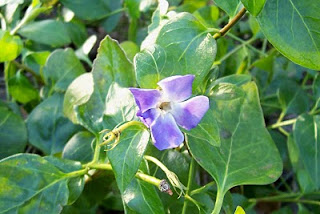 As we left the park we saw this pile of fungus, not quite as pretty as some we've seen!! 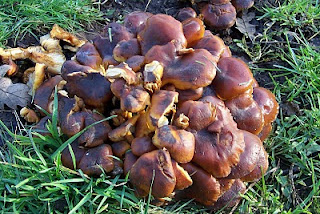 It was a beautiful morning despite the cold, we saw so many birds and it just lovely to hear all the birds singing every where we went.

Our Garden in the New Year

Finally the snow has just about disappeared over the weekend. It's certainly brought a lot of birds into the garden since the 1st January but it will be nice to be able to go out without boots on!
So my garden list is almost as long as the final list for last year already. I've had the largest number of Greenfinch yet - 4, as these birds are usually infrequent visitors to the garden and then at the most a pair that has been good to see.
A Woodpigeon has started to visit again, the first since summer last year. There have been a few fleeting visits from the Long Tailed Tits but the Coal Tits haven't been since the middle of December.
Despite reports of Redwings and Fieldfares visiting people's garden during the snow I have yet to see either around here, I have had a Mistle Thrush a couple of times but it would be nice to see the others in the garden!
1. Blackbird
2. Blue Tit
3. Carrion Crow
4. Chaffinch
5. Collard Dove
6. Dunnock
7. Goldfinch
8. Great Tit
9. Greenfinch
10. Herring Gull (flyover)
11. House Sparrow
12. Long Tailed Tit
13. Magpie
14. Mistle Thrush
15. Pigeon (flyover)
16. Robin
17. Starling
18. Woodpigeon
19. Wren
The garden doesn't look quite so pretty now without the snow and there is a lot of spilled seed to clean up too! 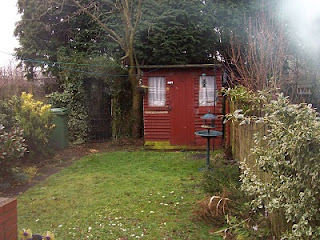 The next door neighbours cat has been scaring off the birds today, it's been very quiet in the garden! 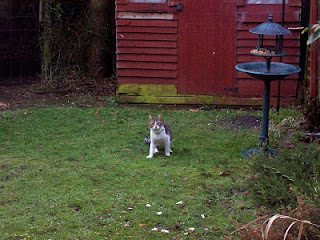 Hopefully now the weather is improving we'll be able to get out and about more and work on spotting some more birds and try and take my list up to 100.
Posted by Pam at 10:48 4 comments: 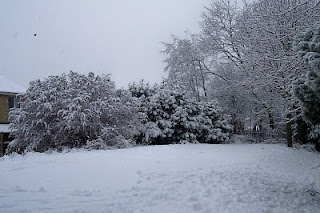 Yet more snow here in Leeds, the worst yet, having to rely on buses to get to work meant a day home for me after the bus got stuck!

So I cleaned off the feeders and topped them up putting some seed on top of the shed too. The Blackbirds and Dunnocks have been feeding of there.

I've just had a record four Greenfinch on the feeders, the most i've had in the garden before is two and that was on New Years Day. The Greenfinch are striking against the snow. There have been a dozen Goldfinch, a Robin, Starlings, House Sparrows, Great Tit, Blue Tit, Collared Doves, a Woodpigeon and a Wren. There is constant activity out there and it's great to watch.

Here are a few photos from out and about today. You can just about make out one of the Greenfinch on the last one. 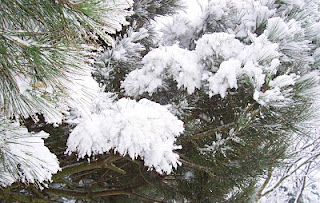 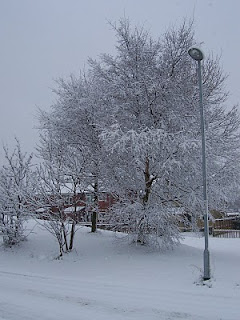 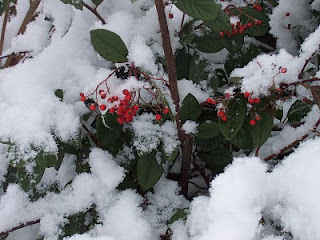 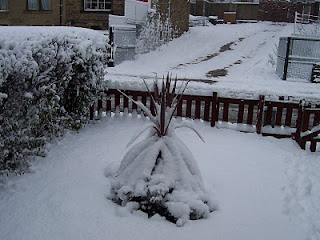 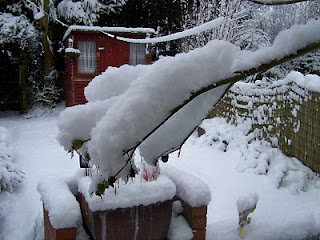 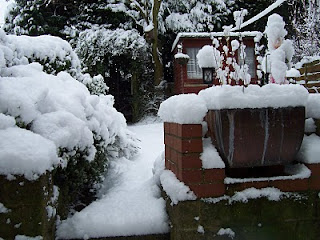 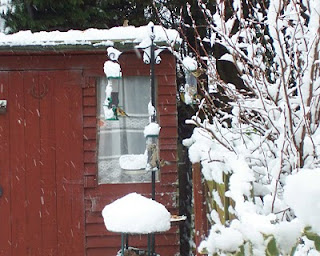 Well back again after an almost internet free week over the holidays. I say almost, there were a couple of sites I couldn't not look at! I don't know what i'd do without the internet to hand - how did we manage before!

Anyway today we headed up to Fairburn Ings, we didn't get there until after two so we didn't have a great deal of time to wonder about. It was a pretty dull day too so the photos I did get are pretty dark. 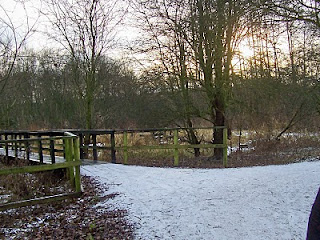 We watched the birds at the feeders by the visitor centre. Straight away seeing Chaffinch, a gorgeous Bullfinch, three Robins, Blue Tits, Great Tits and a Dunnock. Food had been place on various tree stumps on the way to the Pick Up Hide. This made for great viewing of more Chaffinch and Great Tits.

Now just a note about walking round here in the snow - there are a lot of warning signs up about how icy the paths are - they aren't wrong! I had on pretty good walking shoes that I wear a lot in this weather. I still managed to hit the deck after slipping on some hidden ice under a thin layer of snow, to be fair I was looking up in the trees and not watching where I was going at the time! My shoulder and hip took the brunt of the fall and all I can say now is ouch i'm starting to feel it! So just beware if you are visiting and make sure you stop to look up!

The lakes and ponds were pretty much frozen solid all around with just a few watery patches round the edges. At the Pick Up Hide there was only the odd Magpie flying across. It did look pretty nice though. 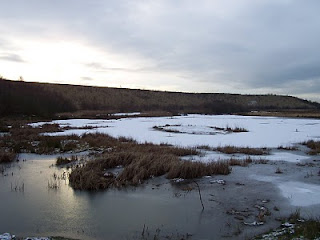 Onto to the next lot of feeders, which are viewed through a boarded fence with holes at various heights so my daughter had no problem looking at all the birds. Again Chaffinch, Blue Tits, Great Tits, Robin, Blackbird, Dunnocks and this time Long Tailed Tits too. I suddenly realised that the Sparrows on the feeders where actually Tree Sparrows and not my usual House Sparrows. I was very pleased with seeing those as it's the best viewing i've had that I can remember. Here are some not so great photos. 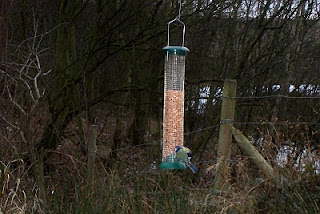 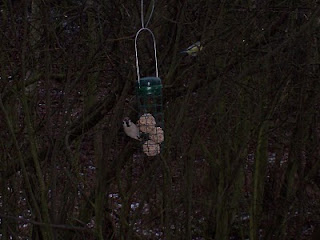 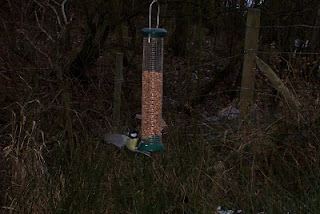 We spent quite a while here as there was quite a lot of activity and it was great to watch. We carefully walked up as the dipping pond, which was of course frozen too. We didn't walk down to it - didn't want to risk falling again. 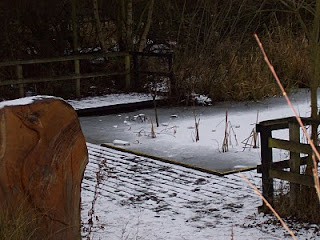 We stopped at the kingfisher viewing point where someone very nicely pointed out a Kingfisher in the distance, we only got a brief flash of orange before it was off. We started to walk around but didn't make it as far as the Bob Dickens hide, it was too icy and it was getting late.

Hubby did take a nice photo of a Teasel though! 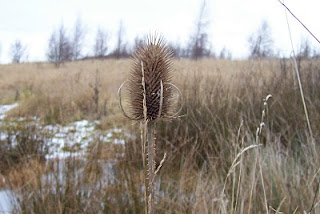 We saw a Peregrine Falcon fly over our heads and hover over the lake, no chance of any kind of photo but here is the lake! 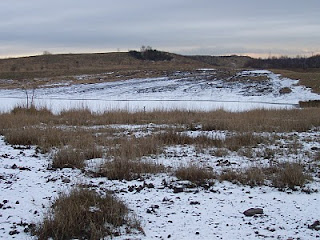 We also spotted some footprints on one of the icy streams, which my little one loves, she has a thing about footprints. We think they were rabbit but feel free to let me know otherwise 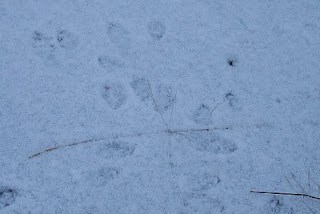 As we got near to the Kingfisher stream I was lagging behind trying to keep upright. There is a path off to the right before the stream, which has a gate across and a deer went bounding across - I was pretty excited as it's the closest i've been to one in the wild. Unfortunately by the time hubby and the little one came back it had gone into the bushes. A Roe Deer in the snow, pretty good to see.

As we walked over the boardwalk back to the visitor centre my daughter stopped and pointed out a Blackbird just sat on the ground at the side of the boardwalk. It followed along the walk with us to the end before flying off. 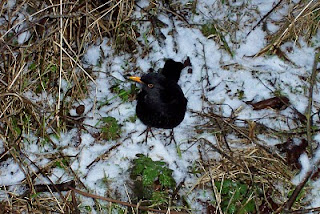 We decided to walk down to the end of the jetty by the car park and were almost set upon by a group of Mallards obviously looking for food. There were Mute Swans, Coots and Moorhens. A group of Gulls on the ice looked to be Black Headed Gulls in their winter plumage, I hope I id'd those correctly, you can't tell too well from the picture but after checking my guide I am pretty sure. 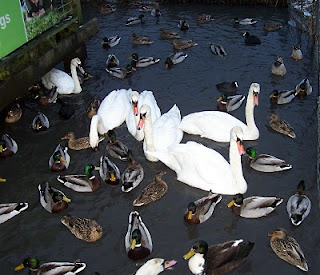 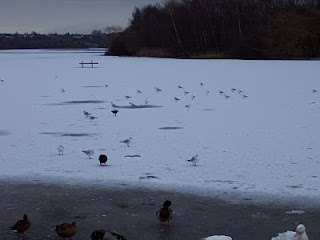 As we stood and watched the birds I saw something fly out from underneath the jetty and off towards the reeds at the right going through the wire fencing. It was a Water Rail - this is my first lifer of 2010 and there was no doubt today after suspecting I saw one at Adel Dam last year. It hung around in the reeds a while and popped in and out giving us some pretty good views. Unfortunately not even a bad photo of it as it was too dark and too far away for the camera.

A very nice end to our little trip and a good start to 2010!