This is something I do anyway but due to some pretty major spinal surgery i'm having this week (EDIT op postponed till the 7th so a little breathing space!) i'm going to have limited mobility for a few months it's pretty much all i'm going to be able to do!

My garden is possibly going to have the most documented birds in town!

As walking is part of the recovery process i'll be able to get out locally in time so hopefully i'll be able to cover the local parks and eventually the urban woodlands too. I've considered doing the patchwork challenge i've seen others do - details here - and this may be the perfect time to start. Granted my patch is not going to produce huge numbers but at least it's something that will help keep me occupied (sitting still and not doing anything is not something i'm good at!)


Where I live has parks and my own garden has its good moments.There isn't a huge variety of species here but I figure if I included the woodlands that'll broaden the number of species I could see.

I've figured out a patch that covers my area including three parks in town, my walk to work and the urban woodland/beck. It comes in at just under 3km² 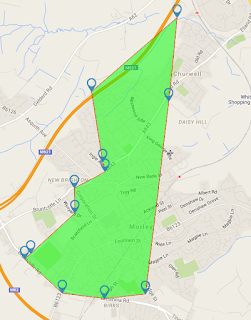 It took a bit of fiddling but it does just cover everything. The three parks are varied, the one close to home is the smallest with the least amount of species (or the not so nice park as we call it!), the park in the centre of town is ok, it has a few little paths and hidden away areas and it has in the past produced my first (of only two) ever views of Waxwings! The third park is the best one for a walk and for the birds and is good for Redwings/Fieldfares in winter.

It's going to be a tough few months and blogging will probably be sparse but at least i'll be able to keep up with everyone else's easily enough so that's something!