Well all went good with the op, though i'm off work still till Monday. The weather of course has been hot hot hot so it's been a bit of a relief to be able to stay at home with the fan on!
I've made sure the water for the birds has been kept clean and topped up and the Starlings especially have been making great use of it. They have been lining up together round the edge of the bird bath all drinking from it - quite a sight. I've seen a few of the House Sparrows drinking from the smaller dish on the feeder too.

The birds have been out in force all week, the Starlings have demolished several fat balls helped along by up to a dozen Sparrows and their young. The Robin and a couple of Dunnocks picking up anything that's fallen on the floor. There has been a visit from a Great Tit family, the first time I ever remember seeing juvenile Great Tits, they have been a couple of times. The Goldfinch juveniles have gone from two to four and are regulars along with three adults on the nyger seed and sunflower hearts.

We still have a couple of juvenile and a couple of adult Blackbirds around, the young seem quite scared of the noise the Starlings make and seem to cower quite close to the ground! The Woodpigeon manages to squeeze onto the feed tray and eat as much as it can, no wonder they look so big. The Collared Doves are still around too, most we've had at once is four at the moment but you usually see another couple on the roof or telephone wires nearby.
Finally the Swifts are still as noisy as ever - there are up to 7 flying about at once and they fly backwards and forwards over the house twittering non stop till late into the evening.
So that's it for the birds for now. The garden is looking good despite the lack of rain and our neighbour has given us some Sweet Peas, which are now planted in the front garden. Something my Mum has always grown but a first for me. Here are some of the other flowers that are out at the moment.

This first one is a Californian Poppy that comes from my parents, they got the seeds from someone they met on a garden tour around their town last year. I love how it has the hint of pink in the leaves. 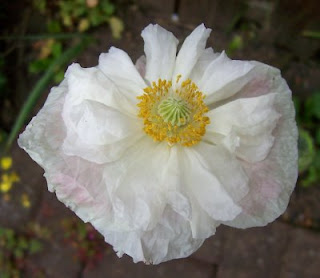 This poor thing opened up looking all 'chewed' around the edges. It must be one of the throw and sow seeds I put in - I don't know what it is. 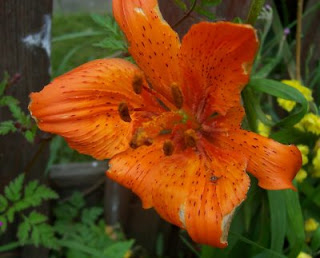 This is a returnee from last year, not sure what this one is either! 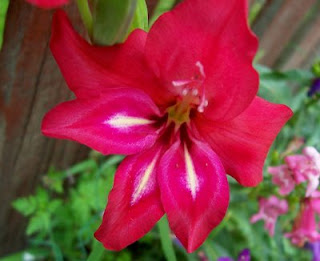 The Carnations in my back garden, they never stand upright. 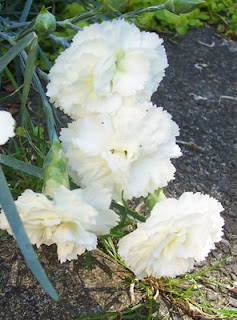 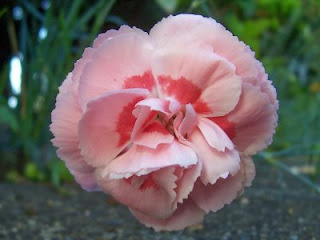 This plant is ground covering and spreads quite quickly in the summer, but it looks great, the leaves are a lovely light green and the yellow flowers are beautiful. 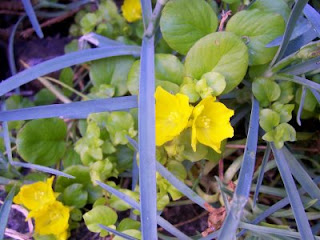 The poppies have really taken to life around our bins - certainly brightens the area up, several plants have seeded themselves. 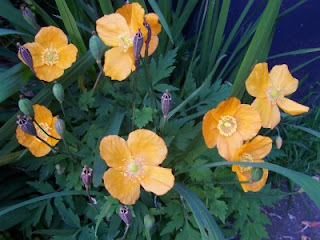 These are the flowers that have opened on the trailing plant around the top of the garden gate, they are very tiny and you can only just see them against the leaves unless you are pretty close. 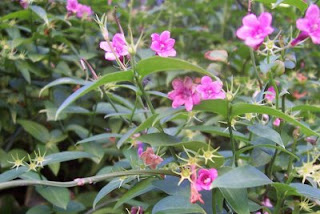