Last weekend we drove over to check out Tophill Low nature reserve near Driffield, it's run in conjunction with Yorkshire Water and has been open as a nature reserve for over 20 years. It was easy to find despite being down lots of windy country roads!

As we turned in a Hare leapt in front of the car, we stopped but it panicked and couldn't get back in the fence and ended up running down the road in front of us before finally finding a gap. 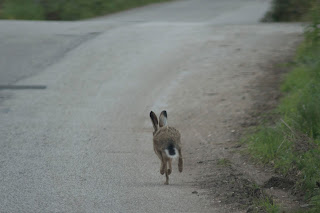 There is a ticket machine just off the car park when you get there, but it had an out of order, pay next time sign on and we couldn't see anyone to ask about it so we headed in via a boardwalk in through the woods and overlooking a pond. The main hide is large and has places to set your scopes/cameras if you like. It looks out over D Reservoir and also a feeding station off to the side. 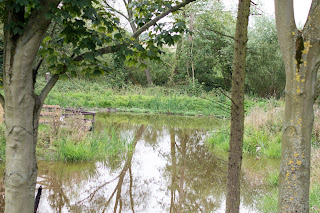 The reservoir was covered in Coots, i've never seen so many! Though when you looked closer there were Tufted Ducks, Cormorants, Swans, and in the distance quite a few Gulls. 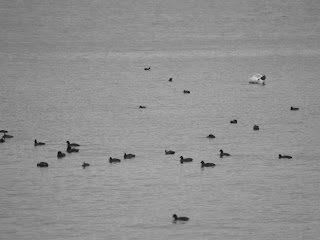 We sat and watched Greenfinch, Chaffinch, Great/Blue Tits and a Tree Sparrow at the feeder. The hide was great and there are glass cases with lots of different books that held my interest for a while until I was urged to move on. We went down the hide stairs and out onto the path to walk around the reservoir spotting a Buzzard flying about the woods. 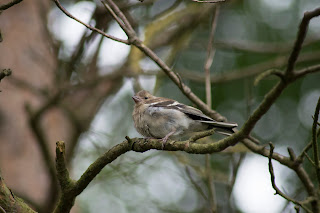 At the first hide which again looks out on to the reservoir, a Great Crested Grebe was on the water right outside. 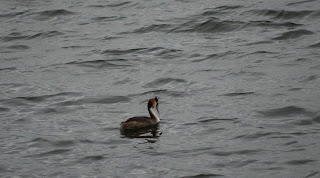 After this hide the path leads into the woods past a pond with a feeding station and heading up to the North Marsh, which was quiet though we did spot a couple of small birds in the reeds - warblers possibly? Now we had a bit of an issue in here when my daughter spotted a couple of large moths settled on the inside of the hide, her phobia of moths and butterflies is getting worse and she had to leave and refused point blank to go in another hide for the rest of the day! 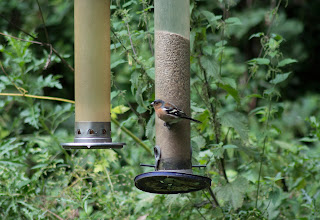 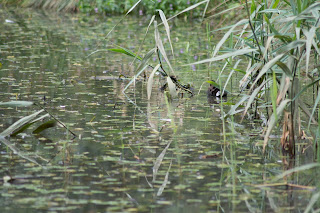 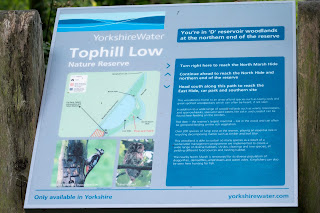 We saw a few of these Black and Yellow Longhorn Beetles around the reserve. 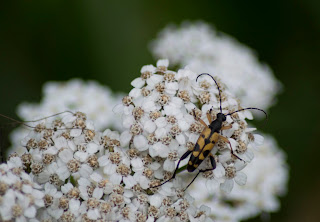 Outside the hide we were distracted for a moment by this beautiful Southern Hawker. 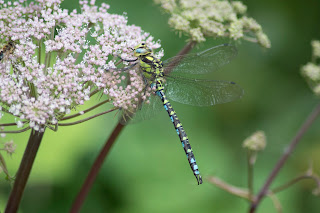 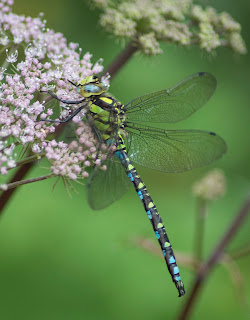 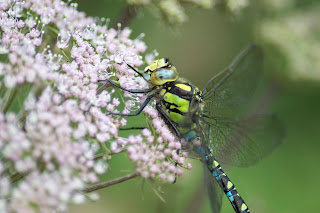 Then we were surrounded by chirping - several Goldcrest flitting around the trees above our heads, too quick for the camera but we watched them for a while.

A few Gulls were flying over the water as we looked from the next hide and I picked out BH Gulls and I think Little Gulls too. There were quite a few gulls sat on the wall but a Buzzard scared them off before we could check them out properly. 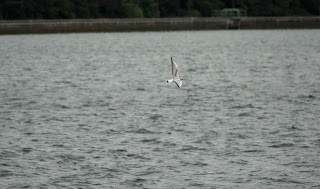 There were signs on the next hide requesting quiet due to Kingfishers nesting, of course they were not around now! We did however see lots of snails and butterflies and the odd dragonfly around the paths. 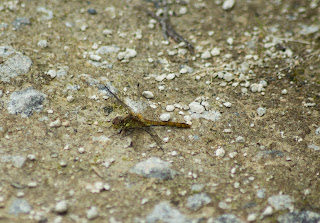 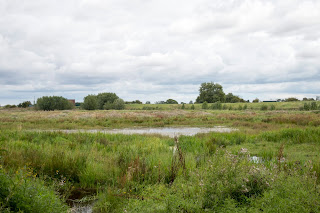 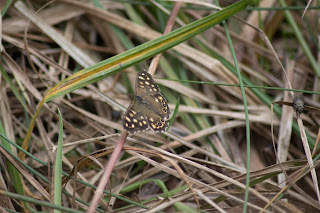 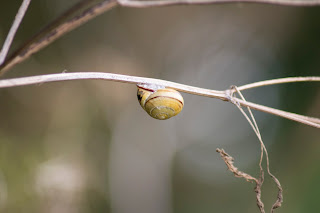 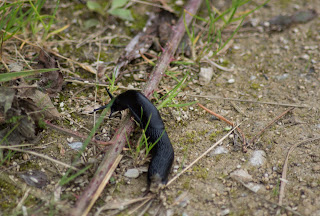 We watched a large flock of Tits - Long-tailed and Blue mostly and in the middle of them what looked like a Chiffchaff. 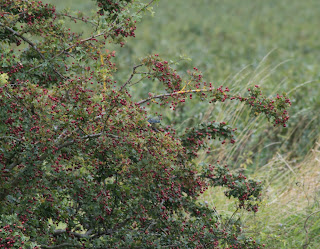 This tiny bug landed on the path in front of us, it was only that my husband saw it move that we didn't mistake it for a bit of a plant! I think it's a Green Shieldbug Nymph? 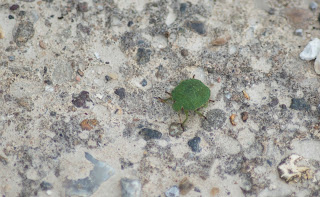 Back at the car park we stopped for lunch and the ticket machine was working now so I paid and felt happier doing that!

Walking the other way towards O Reservoir the Budleia was full of Butterflies, if only the ones in my garden were so well used! 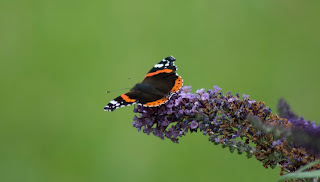 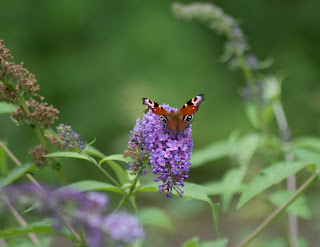 There were more butterflies and moths flying up out of the grass as we walked around the reservoir, my daughter did not fair well here and was all for going home! I'm not sure where this fear has come from and i'm not sure what we can do about it?! 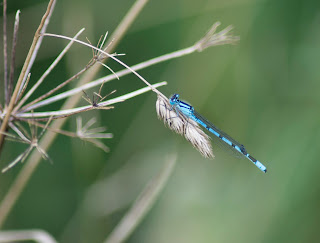 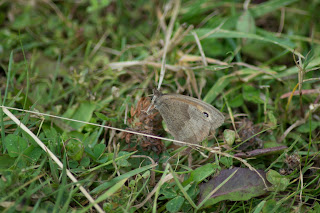 Terns and Gulls were flying over the water and I realised after the fact that I had my camera on the wrong setting arghh!! From the hides along the way looking over the marshes we saw Green Sandpipers, Goosander, Little Egrets, Heron and Teal. 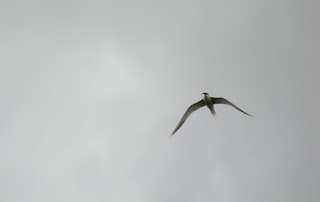 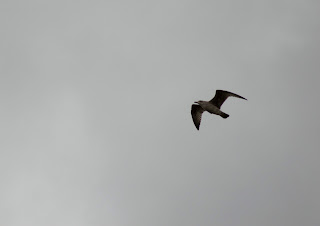 Going into one of the hides by the lagoon I spooked a bird that was in there, a Robin maybe? From the hide we saw a young Great Crested Grebe, Gadwall and a Little Grebe and just before we left a Kingfisher flew across and perched on a tree in the distance for a minute. 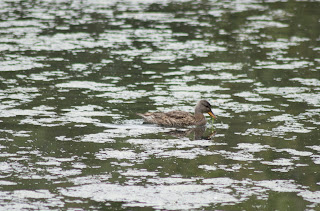 We realised we'd missed the path for the Watton Nature Reserve but decided not to go back as time was getting on now so we headed back for the car. It's a bigger reserve than I thought and I think we really need to spend a bit more time here to see what else it has to offer, so we'll be back! 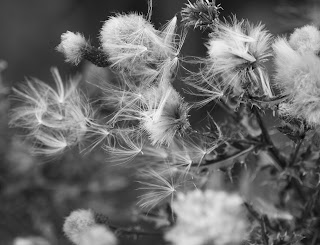