On Sunday morning we joined a bird walk run by the Swillington Ings Bird Group, it was open to everyone and it was quite a large group that headed off. I'm recognising more faces now, it's good to see familiar ones and everyone is quite friendly!

We started off from the hide and walked around to Astley Lake, which was full of Lapwing, Gadwall and Gulls. A few Common Terns were flying around too. A Common Sandpiper was on one of the islands, my daughter after watching it through a scope decided it looked like it was twerking!

It started to rain a bit as we moved on but it didn't last long thankfully and then the sun came out and it warmed up a lot. As we walked on to Lemonroyd lake a Kestrel flew over and hovered a couple of times nearby.

At the lake, scopes were set up and Pintail ducks found at the far end, I've been a couple of times when they've been here and never managed to find them, so I was pleased to see several, granted they were mostly bottom up! A new bird for me.

As we were focusing on the ducks one of the guys suddenly realised there was a Bittern on full view across the side of the lake! Amazing, only my second sighting and again at St Aidan's, almost everyone in the group saw it apart from a few people who hadn't quite caught up with the group. It did wander back into the reeds and didn't appear again whilst we were there.

You can just about see the Bittern in this shot! 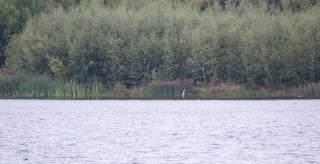 We walked up to look over the ridge and furrow. seeing a beautiful Marsh Harrier, Curlew and a Snipe too. Then a Wheatear was spotted and after a bit of direction everyone managed to see it. Thank goodness for the grazing cows, great for using a guide!! A Little Egret, Heron and Little Grebe were on the Reedbed at the other side of the path.


The views here are always stunning 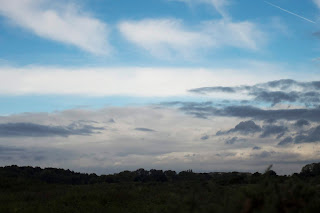 Back towards the causeway now and on a path we'd not explored before, which lead up to a view over the main lake. A nice little spot, which has a feeding station too and when it's quiet it can be good for the small birds including Willow Tit (thanks for that tip!), we'll come back another time to see what we can find. While we were there though we had a great view over the lake and quite a distance around. Birds of prey were the stars of the show though, with Buzzards in the distance, Sparrowhawk, the Marsh Harrier and another new bird for me - a Hobby! 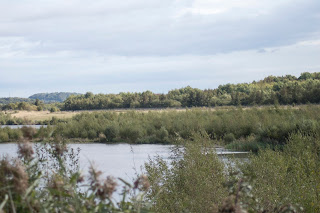 It had got quite warm by now we were being buzzed by Butterflies and Damselflies. I'm not sure on what species of Damselfly but the Butterflies were Speckled Wood, Whites and a Small Copper too.

Walking back towards the hide now I spotted a little creature running across the path - a newt! A Smooth one I believe, it ran into the grass at the side. I looked them up later and didn't know that they come out of the water to hibernate, so maybe that's what it was doing?

I realised I hadn't taken many photos during the walk but then I also realised we walked a lot quicker than we usually do (which is why it always takes us so long to walk around anywhere........we're so slow)!

We had a good morning and I saw two new birds and found out a little more about the site. Thanks to everyone involved, it was well worth doing and we really enjoyed it.
Posted by Pam at 21:52