We spent Saturday morning at Rodley.  A Jay was at the gate to greet us, my camera was still in my bag so I only just managed to get it out and grab a shot before it was gone. A Red Kite was overhead, my first one this year. 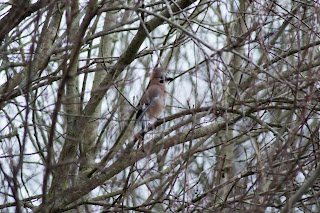 Yet another dull day and windy too but we were prepared as usual. From the first hide we watched Goldeneye, Pochard, Black-headed Gulls and in the distance a Kingfisher was sat on a tree near the Sand Martin bank.

Walking on we lifted up one of the flaps where we usually find frogs, today though we inadvertently disturbed a nest of mice, they had dragged a bunch of dry grass under it and 5 or 6 shot out, we carefully placed the lid back down after we made sure the mice were out of the way of the hinges! 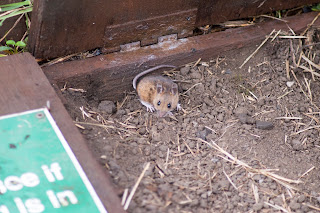 Looking out from the screen over the lagoon the Kingfisher sat on one of the rafts by the edge and then flew up onto a pole. 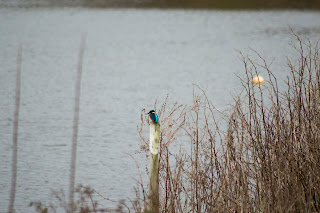 We saw Teal, Gadwall and 6 Herons huddled on the reedbed. 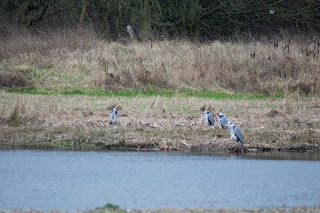 It seemed to be getting darker as the morning went on instead of the other way round. I thought I saw a few Linnets over Tim's Field but they were gone too quick for me to be sure. Stopping at the visitors centre for two cups of tea to warm up we watched Bullfinch, Goldfinch, Chaffinch, Tits, Robins, Dunnocks and Reed Buntings.

Similar birds in the Managers Garden but with Greenfinch, Stock Doves and Woodpigeons too, had to bump up the ISO on the camera so the shots are grainy but I really like the one with the three different finches. 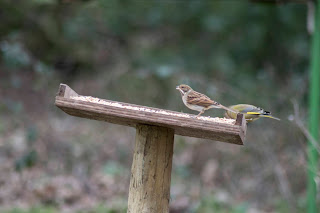 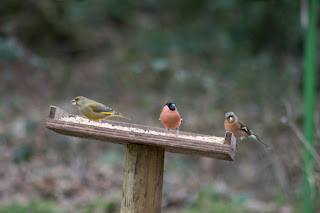 Another good morning despite the weather!
Posted by Pam at 21:08