Making the most of my last days off work we headed to Rodley on Wednesday. Despite the fog and rain we were there early doors. The lagoon was a little hazy but not enough we couldn't see anything. 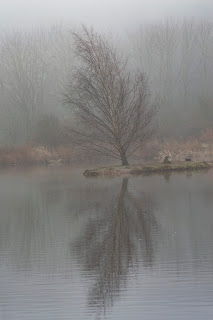 There were plenty of birds to see including 9 Goldeneye, Tufted Ducks, a Little Grebe, Canada/Greylag Geese. The Geese kept lifting off in noisy flocks and disappearing overhead. By the time we left there was only a handful out on the water. 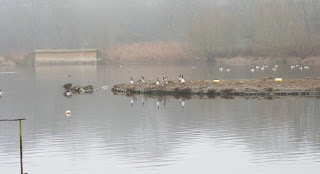 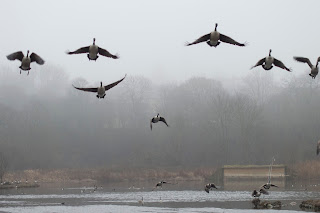 Along the Willow Path we saw Bullfinch, Dunnock, Blue/Great Tits, Song Thrush, Blackbird and Robin. By the field a flock of Linnets were flitting about. 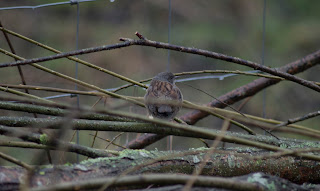 On the Duck marsh were a large flock of Black Headed Gulls with a few Common dotted about. I saw a BH Gull flying past which had a fully black head, a bit unusual in winter? 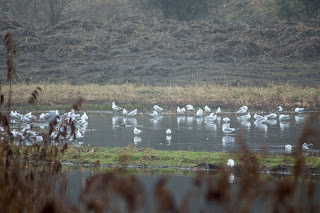 We counted 9 Herons around the waters edge, plus a number of Teal and Tufted ducks too. A Canada Goose stood watching us expectantly, maybe one used to being fed in a public park somewhere? 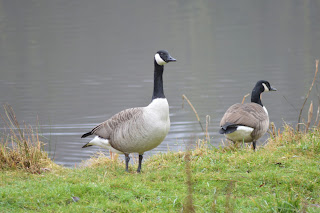 A Jay flew off in the distance, the trees were full of Woodpigeons and the banks were covered in pigeons. The Grassland was quiet, mostly it was more BH Gulls and a few Moorhen. The riverside walk produced a Goosander flying along it. We watched a Goldcrest in the trees across the water and a lady told us there was one nearby in the brambles but that one stayed out of sight for us.

After stopping for a cup of tea to warm up a little we walked up to the managers garden. It was quiet there, Chaffinch, Blue Tit, Reed Bunting mostly. The pumping station was busy with more BH Gulls and a Grey Wagtail was flying about. A Pied Wagtail was in the field by the manure pile and a Crow was eating what looked like a rat. 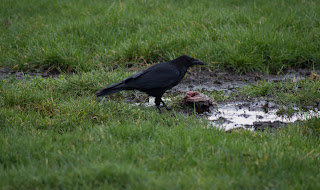 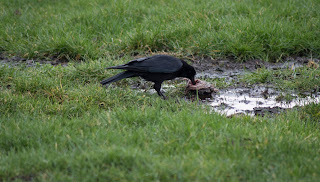 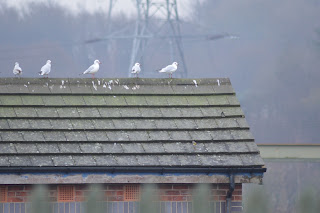 Back at the car park one of the trees had a small flock of Redwing and Fieldfare. A nice end to the morning.
Posted by Pam at 11:58