Saturday saw the first Leeds Birdfair at Rodley Nature Reserve and we headed down to check it out. We were there not long after 9 and were directed to park up by the visitor centre for a change, it looked like the guys handling the parking did a great job fitting everyone in.

Some of the stalls were still being set up but there was a fair few people about already. The bacon sandwiches smelled great but i'd already had breakfast! We stopped to look at the moths from the moth trap, there were quite a few and it had already been open a while, there were some beautiful ones too. It was getting busy around the table and we decided to walk around the reserve a little. 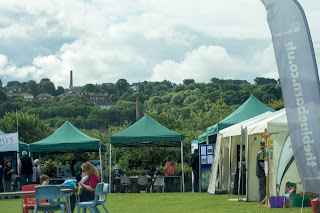 Walking around ended up taking a lot longer than we planned, we do get easily distracted. Today it was by the bugs and bees. We walked down the side of the meadow and saw Dunnocks and Greenfinch in the hedgerow and Sand Martins and Swifts over the field. The flowers were awash with bees and we spent a bit of time taking photos. 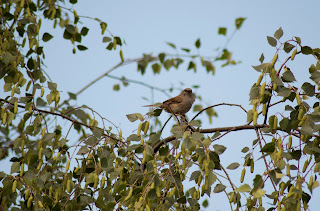 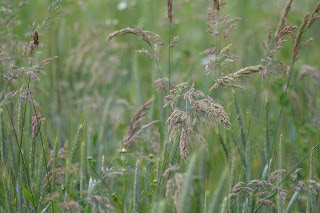 I didn't do too bad with identifying things either today. 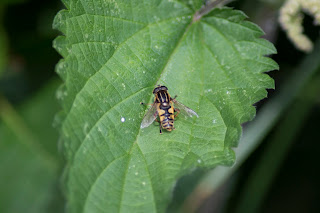 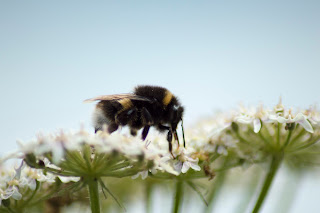 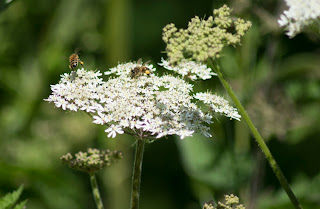 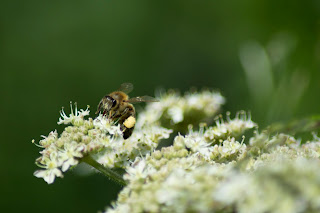 At the end of the path we noticed there were froglets all over the grass, hopefully we hadn't stood on any they were so tiny. 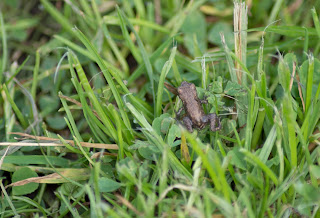 By the feeder along the willow path a gentleman pointed out that a bank vole had been seen underneath it, we waited a couple of minutes and not one but two popped out! You can just see one of them in the grass here. 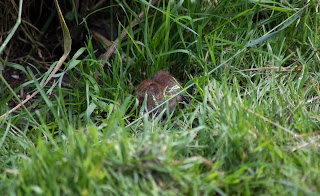 The view from the willow path hide was quiet at first then three Little Grebes appeared, a pair of Mallards swam across and in the pond behind a BH Gull and a couple of Oystercatchers flew up screeching at each other. Across in the trees we could see a Heron. It was lovely to be able to just sit for a while and see what appeared. A Tern kept flying past and a Moorhen swam by the bank, a Jay flew past too.

My daughter had my old bridge camera which doesn't quite work right but she made a good go of taking pictures. 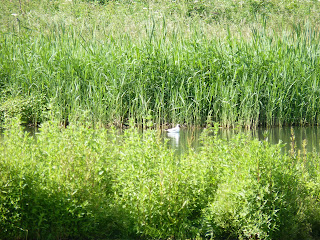 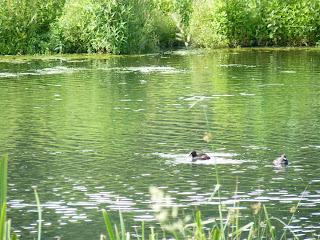 Taken by my daughter

Along the path were Long Tailed, Blue and Great Tits, the Sand Martins were flying overhead. 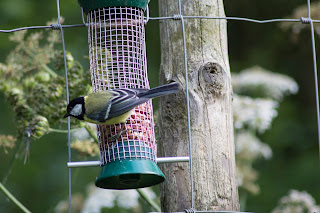 From the next hide the Swan family were just getting into the water and they swam off into the far marsh. A Gadwall family were swimming in and out of the reeds and we could see Reed Buntings and a Warbler on the reeds themselves. 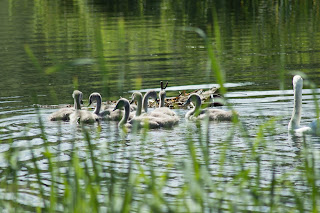 We checked out the little lift up panels along the path and two of them had toads in, three in one of them! 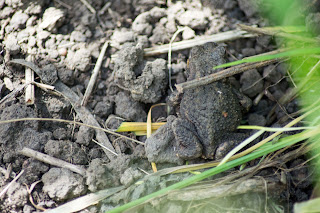 One of the 'guides in the hides' had a scope set up at the lookout point focused on the GC Grebes and their chicks, which meant my daughter could get a good look as she was just at the wrong height for the windows and the binoculars! He also mentioned a Blackcap singing further back down the path and after a moment I could hear it too. We chatted a little about the Grebes, Whitethroats and the swifts swooping over the water.

Along the path we spotted more insects. 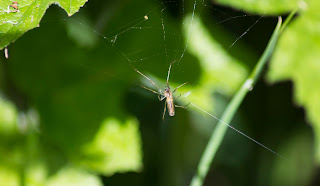 I think a grass spider? 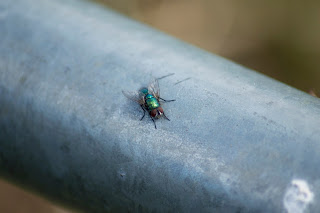 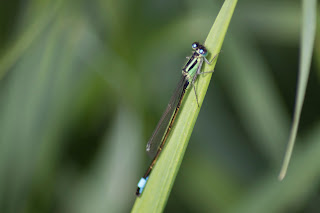 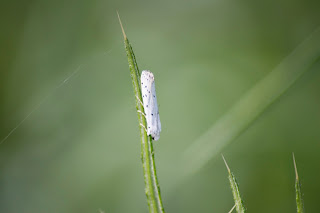 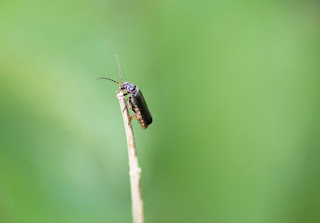 Soldier Beetle (thanks to Merlin & Madge!)

The new lagoon hide is now open and has a great view over the water. Another 'guide in the hide' was set up in here and was chatting with everyone. Both guides we encountered did a great job I thought!

From the hide we watched the Sand Martins, one perching briefly to preen, the Terns and their brood, we saw two of their chicks, I think they have three altogether. I saw movement by the waters edge, a Kingfisher!! It flew out and landed on the 'goalpost' branches for a brief moment then carried on into the trees across the other side of the lagoon. I know these are sighted often here but it's the first one i've seen since my first visit not long after it opened! 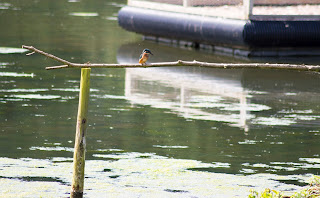 We walked back to the reedbed hide and heard that there had been a Kingfisher seen from there but not whilst we were there! We did see Little Grebe chicks, Swans, Reed Buntings and a Moorhen.

There were quite a lot of caterpillars on the nettles by the meadow, i'm not sure what they are though, maybe Peacock Butterfly? 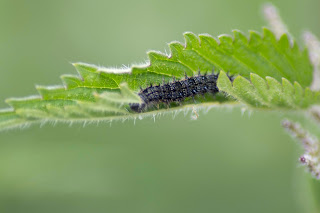 It was good to see the pond area open again, we saw snails, tadpoles, newts and the odd damselfly. We spoke to one couple who until now hadn't even known the reserve was here, they'd seen an advert for the Birdfair. 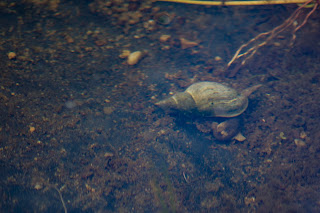 Back up to the visitor centre it was very busy. We had a wonder around the stalls and I bought some homemade piccalilli and pineapple jam. I picked up a few leaflets for some local areas i've not been to before like Meanwood Valley and Post Hill. A stop for some jacket potatoes and then my husband found someones fitbit on the floor so we dropped that into the visitor centre, I hope the person was able to get it back! 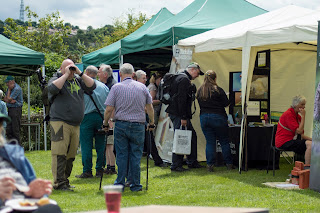 Up to the managers garden, which had quite a few Greenfinch in it, followed by a Bullfinch, Robin, Stock Doves and a Reed Bunting. 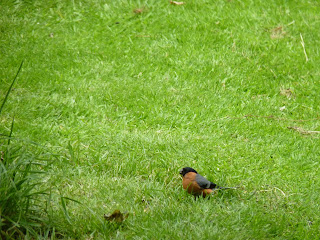 Taken by my daughter

We were a bit pushed for time now and though it was a shame we missed the walks and talks because we took longer than we thought walking around we had a great day and it just means we'll have to go back to the next one!

I did notice that there were lots of families and younger people there, in fact i'd say all age ranges were covered, which was fantastic.

Well done to everyone involved!


(Oh and the pineapple jam is delicious!) 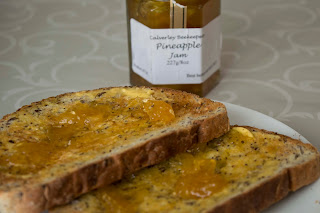